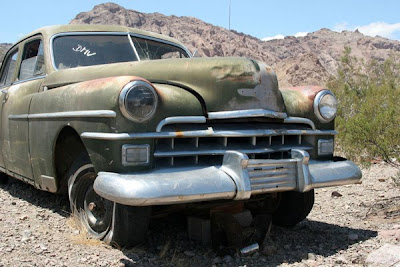 Looks like the Feds “Cash for Clunkers” policy has stirred some pretty dramatic demand for new vehicles spurring on the second largest month-to-month production jump in vehicles in nearly 40 years.

While I recognize the novelty of the “Car Allowance Rebate System” policy, I’m more than a bit skeptical of its overall utility and simply appalled at the thought of thousands of Americans queuing up for their government auto allowance.

Oh how the mighty have fallen!

One day the force of impulsive and mindless debt fueled conspicuous consumption and class conceit are driving widespread demand for the biggest baddest Hummers and SUVs… the next… a modern day bread line of busted households and their two bit jalopies feverishly racing to lock in a chance at a 5% discount on a Toyota Corolla!

I can’t speak to how this policy will affect environmental issues… I’m no expert… though I’m surprised that the requirement was only 22 MPG for the newly purchased vehicle… possibly U.S. automakers would have few eligible products if it were higher.

On a side note, as a former Prius owner (cracked mine up unfortunately) I can attest to the fact that the car is solid… fill it up… drive it and you get 45 miles per gallon... also it’s worth mentioning that it withstood quite a pummeling from the likes of a Ford Econoline… yours truly walked away with just some minor flesh wounds… the car wasn’t so lucky.

As for the effect on the economy… it’s another fraud.

Moving 2010 and 2011 auto purchases into 2009 is clearly providing a short term economic pop but in the long term there is likely no extra demand being created so I would expect the trend of weakness in autos (as seen in the production data chart below) to resume once the policy expires (…or sooner).

Washington elites are likely all aglow over the “success” of the clunkers program and certainly those with auto and environmental interests are equally proud… but where does this type of thing end?

What we have now in America is Keynesianism gone wild… a belief that through gimmicks, tricks and government handouts you can jumpstart and even remedy an economy that’s writhing on the down slope of multiple decades of serious economic distortions… as if more distortions are all you need to repair all the prior distortions.

They claim it worked in 30s… I suppose now the issue will be settled once and for all.

Posted by SoldAtTheTop at 5:03 PM