Today’s release of the S&P/Case-Shiller (CSI) home price indices for June 2009 showed a continued bounce in prices with the Composite-10 index increasing 1.40% on a month-to-month basis.

Again, this is another notable development but it’s important to put today’s results in perspective before getting too confident that the bottom is in for house prices.

As with last month, today’s results showed that metro areas with typically strong seasonality worked to pull up the composite series while many other markets gained modestly leaving only Detroit and Las Vegas as decliners.

It’s important to remember that the CSI data is lagged by two months and that the metro markets with strong seasonality (… especially recently) tend to reach their seasonal peak between June and July and then typically decline through the fall reaching a seasonal bottom in February.

Also, although Standard & Poor’s publishes a seasonally adjusted series, their seasonal adjustment appears to be underestimating the degree of seasonality that is currently present in many markets (… Boston is a good example).

In any event, as the summer pricing cools the Composite indices will more than likely reflect the aggregate movement of prices declines just a strongly as it has captured the spring-summer bounce.

Also, looking at the 1990s-era comparison charts below its obvious that even after the main downward thrust has been reached, the housing markets have a long tough slog ahead with the ultimate bottom likely many years out…. Or if we are currently experiencing the Japanese model… decades out.

Further, is important to remember that the 90s housing recovery played out against the backdrop of a truly unique period of growth in the wider economy fueled primarily by novel and ubiquitous technological change (cell phones, internet, personal computers, telecommunications, etc).

To better visualize the results use Blytic.com and specify search terms like: "case shiller" or "case shiller new york" or "sale pair count". 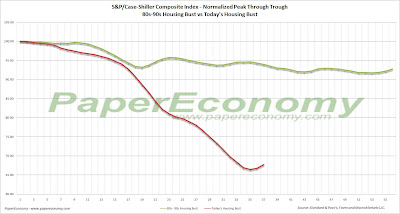 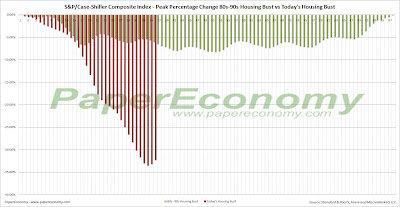 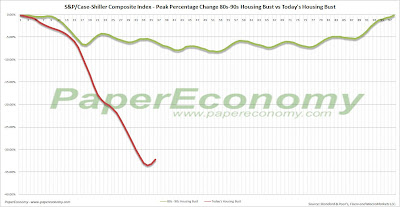 As you can see the last downturn lasted 97 months (over 8 years) peak to peak including roughly 43 months of annual price declines during the heart of the downturn.
Posted by SoldAtTheTop at 6:00 PM