Economy at the Edge 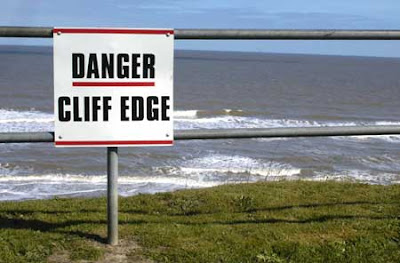 Perusing the data one theme that just seems to jump from the trends is just how precarious the situation is for the macro-economy despite the epic monetary and fiscal policy efforts of the meddlers at the Federal Reserve and in Washington DC.

We’ve seen trillions pumped into bailouts, incentives and stimulus with unprecedented quantitative easing and interest rates forced to generational lows but what do we have to show for it?

Swindler “zombified” banks and the Fed packed with junk debt, some artificially stimulated home sales and a fabricated refinance boom, a notable distribution of government money for nonsense contracts and road projects, a “clunker/caulker/whatever” boost in auto, appliance and other durable goods production and some wild claims about the number of jobs saved.

Commercial banks are buying government securities at historic rates while total loans and leases continue to decline, housing permits have clearly turned south and appear headed back to another strike at the lows of 2009, new home sales just registered the second slowest pace in history with the lowest level occurring just last month.

Manufacturing activity is clearly slowing in the wake of last year’s inventory restocking binge and retail sales and consumer credit are cooling down as is consumer sentiment while consumer prices are simply in decline.

And worse yet… all of this “success” appears to now rest almost solely on the wobbly fate of a stock market struck ill earlier in the spring with a case of the “flash-crash”, a disease of apparently unknown origin.

These are uncertain times indeed yet a recent paper by Zandi and Blinder suggest that without all the government “help” the current state of the macro-economy would, by their reckoning, be much worse even a second Great Depression.

Should the economy slump back into recession in the next few quarters, an outcome that Robert Shiller gives it better odds of occurring, one has to wonder what the Feds could possibly do next?
Posted by SoldAtTheTop at 9:28 AM