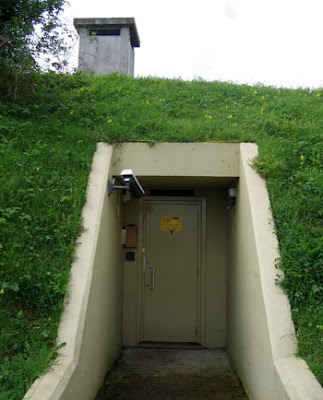 The skies over Boston were a-rumblin’ with thunder last night, the fireman’s siren could be heard shrieking in the distance but not even a disgruntled mother nature or the ferocity of her “act of God” retribution could steer my attention away from the train wreck that is our macro-economy.

Yes loyal readers, I might be a bit early… I might even be wrong… but I’m heading for the bunker. Better safe than sorry.

The real (and juiced) economy has clearly hit the skids and the stock market, the sole brittle peg on which this whole global ponzi-scheme gamble currently rests, is now giving a fairly clear indication that it concurs.

The S&P 500s 200 day moving average is just barely a whisper above its level of just 30 days ago.

If that measure were to turn negative, an event that appears more certain with each passing trading day, or worse yet… 0.05% negative, we’re done for… or so I’m convinced.

You see, the 200 day moving average rarely declines during a bull run and turning notably negative is a sure sign things have taken a turn for the worse.

If stocks head back into bear territory, that is… a long slow “sell into the rally” slog with equities retreating generally 20% or more from the recent April high, it will put the wipeout of the March 2009 low clearly in view.

Stop for a moment and contemplate the potential outcome should we head back to the lows.

This would be nothing short of a major rupture in confidence with Federal Reserve and Washington goons scrambling to double down in the false hope that maybe, just maybe, an even bigger shot of stimulus will succeeded where the last effort failed.

Obviously it would all be for naught… and this time everyone would know it.

A big business friend of mine assures me that his area of the economy (consumer non-durables) is booming… they have too much demand and not enough capacity as an underestimate of 2010 activity leaves them scrambling to assemble new overseas production facilities.

What could this mean? During 2008 they also underestimated the severity of the decline believing their offering to be “recession-proof”, a miscalculation that led to an abrupt bout of layoffs in early 2009.

Could they be right this time? Could recovery really be here but just stalled in a massive consolidation of sorts?

Obviously, we will have to wait to find out but suffice it to say, I’m closing the hatch!
Posted by SoldAtTheTop at 7:43 AM