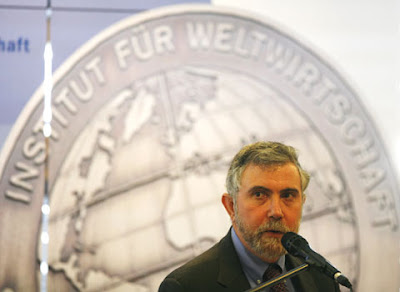 The portion of the segment that I found most interesting starts at about 30:30 where, in response to a pretty comical caller from Essex Massacusetts, Krugman suggests that there is no difference between job creation that comes as a result of private industry spending versus government spending.

“Under what possible argument can you say that if businesses go out and spend a bunch of money, that will create jobs but if government goes out and spends a lot of money that does not create jobs?… putting the money to use is what we want to be doing.”

Clearly Krugman believes that capital and resources can be just as relevantly (and possibly as efficiently) allocated by the command and mandate of the elites in Washington as by the dynamism of competitive markets.

In a sense he is stating his belief that the private and public sectors are effectively interchangeable. If the private markets don’t want to reinvest and spur on production then the government can simply step in and fill the void.

I suppose this is just the typical thought process of a Keynesian but still hearing it voiced so simply seemed to me to be a bit revealing.

If government can really create jobs that are just as relevant as private sector jobs, why have a private sector at all? Why not just have bureaucrats allocate all the jobs? Who needs CEOs and boards of directors and shareholders with all their private profit motive? Why not just put politicians in charge of the whole shebang?

Krugman has obviously not truly thought this one through.
Posted by SoldAtTheTop at 3:26 PM