99ers and the Continual Decline 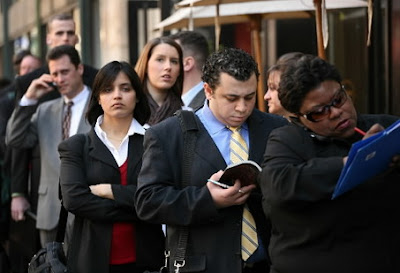 Reading through the comments trailing this article and posted at this website it is nearly impossible not to feel concerned for the plight of the millions of long term unemployed that appear to be sinking deeper with each passing day.

Worse yet, the economy is not going to be able to absorb these folks any time soon as historically weak hiring and the tarnish of multiple years of unemployment work to morph these poor souls from productive workers into a class of downtrodden and financially wrecked individuals with defunct skills.

Yet, what really is the obligation of the federal and state governments to mitigate the pain associated to the adjustments taking place in our macro-economy?

With the latest unemployment extension costing over $85 billion for just thirteen more months of long term benefits (excluding those that have exhausted their benefits at 99 weeks… the 99ers), the roughly $70 billion the feds dole out for food-stamps, and the hundreds of billions spent on all the other “safety net” policies, the government and the public needs to face a harsh truth.

With a downshifting economy, greater competition from emerging economies and the demographic nightmare of boomer retirement, hard choices will have to be made concerning the plight of those that will inevitably slide back down the wealth scale.

Is the role of government to artificially prop the gains made by generations of the middle class even when the trends have turned against them? ... even when the steps taken to lessen the pain are just temporary and inevitably hopeless?

The “99ers” provide a clear insight into this dilemma.

Those that have been unemployed for 99 weeks or longer are effectively in critical condition desperately hanging on for some sign of the return of their prior healthy self.

But sadly for many (maybe most) the future only holds a deeper despair as many face the prospect of significant career and lifestyle demotions, dashed plans and disappointments.

Any further assistance might bide some time, but as the macro-trends turn further against a generation, no amount of subsidies will bring back the past.
Posted by SoldAtTheTop at 1:24 PM