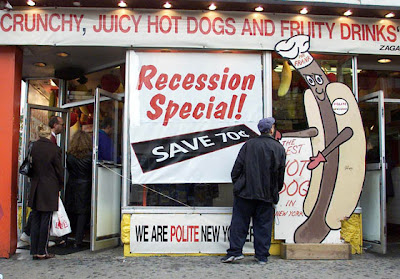 With much of the econ-finance talk these days still centered around the possibility of a looming “double-dip” let’s take a closer look at two particularly sensitive and accurate leading indicators of our economic health to see if we can tease out the future trends.

First, the Federal Reserve Bank of New York is known to use the yield curve (or more specifically the spread between the 10 year and the 3 month treasury yields) to calculate a probability of recession.

This method appears to have been spearheaded by Professor Arturo Estrella of the Rensselaer Polytechnic Institute and Professor Frederic Mishkin of the Columbia Business School as outlined in the June 1996 issue of Current Issues in Economic and Finance, a journal published by the Federal Reserve Bank of New York.

The yield curve probability method is said to have a nearly perfect track record at predicting recessions some two to six quarters ahead with only one false positive, a period in 1967 that many economists, most notably the late Milton Friedman, considered to have been a credit crunch/mini-recession even though the NBER does not officially recognize it as such.

When the growth component of the WLI turns strongly negative (< -6) it generally means a notable slowdown or recession is in the offing.

So what are these two important indicators saying about our current economic situation?

The yield curve spread indicator is indicating that the probability of recession is nearly zero while the ECRI leading index is still showing significant weakness with the growth component currently at a negative level of -1.5.