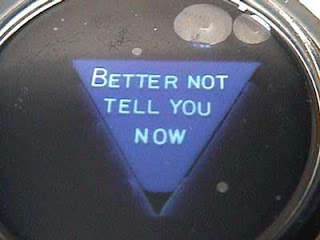 With all the ugly sub-prime news lately, it’s been easy to neglect our friends over at the National Association of Realtors (NAR).

Taking a look at the latest market forecast from their Chief Economist David Lereah though, you’d think he’s resorted to using a Magic-8-Ball.

I can see him now, crouched in the corner of his locked office muttering “Ask Again Later… Concentrate and Ask Again… Outlook Not So Good… Dammit!”

It appears that the NAR is hopping on the sub-prime bandwagon to an extent, suggesting that the latest developments are now affecting their ability to forecast the remainder of the year.

“Lending problems in our nation's subprime marketplace are building, which could inhibit future housing activity and further dampen our forecast.”

Additionally, Lereah seems to be unusually preoccupied with the weather suggesting again that:

“In December, unusually mild weather brought out shoppers and January existing-home sales rose, … However, a sudden chill in January slowed shopping activity relative to December and pending sales, based on contracts, fell.”

“We have yet to see the biggest weather impact – February’s winter storms brought markets to a halt in much of the country, and it was the coldest February since 1979 – that should drag sales down in March,”

Interesting analysis for an economist who has seemingly overlooked virtually every economic rain could that has peaked over the horizon.