Senators and the Subprime Implosion 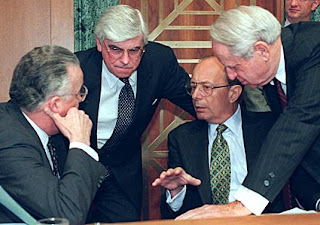 Yesterday, the Senate Banking Committee held a hearing titled “Mortgage Market Turmoil: Causes and Consequences” on the topic of the mortgage meltdown.

Opening the hearing, the committee chairman, Senator Christopher Dodd (D-CT) offered a generally accurate, yet slightly disingenuous account of the evolution of the easy lending era in the US which was then followed by a round of opening statements from the other committee members.

During these statements there was an unusual amount of Greenspan bashing, placing a substantial amount of the blame on the former Federal Reserve Chairman’s shoulders.

“In February 2004, the leadership at the Federal Reserve Board seemed to encourage the use of adjustable rate mortgages that today are defaulting and going into foreclosure at record rates. The then chairman of the Fed said in his speech to the National Credit Union Administration, and I quote him ‘American consumers might benefit if lenders provided greater mortgage product alternatives to the traditional fixed rate mortgage.’ … In my view these actions set the conditions for almost a perfect storm that is sweeping over millions of American homeowners today.” said Dodd in his opening statement.

“I’m amazed, sitting here, listening to all of our colleagues on this committee and forgetting who used to come here before this committee and brag about the housing market carrying the economy. None other than our former Chairman the Federal Reserve, Alan Greenspan. And he was in charge of bank regulation at the time that all these kind of sophisticated mortgages came into being. And I didn’t hear him say a word about those when he was here. And now I hear him criticizing everybody that’s in the business of lending. … I think if your going to criticize, and watch a bubble burst, as he did not only in the housing market but in the market prior to that where he predicted the dot-com downfall before it came, I think you ought to at least take some of the responsibility on your shoulders for having it happen under your watch.” said Senator Mike Crapo (R-ID).

The first panel was exclusively allocated to government regulators including representatives from FDIC, the Office of Thrift Supervision, the Federal Reserve, and the Office of Comptroller of Currency.

The following are some notable quotes from the first panel’s opening statements:

“While liberalized underwriting standards allowed more borrowers to qualify for home loans, competitive pressures eventually lead to the abandonment of the two most fundamental tenants of sound lending, approving borrowers based on their ability to repay the loan according to it’s terms, not just at the introductory rate and providing borrowers with clear information to help them understand their loan transaction.” said Sandra Thompson Thompson Director of the Division of Supervision and Consumer Protection, Federal Deposit Insurance Corporation.

“I want to emphasize that national banks are not dominant players in the subprime market. Last year, their share of all new subprime production was less than ten percent. We know of some subprime lenders that have abandoned their plans for a national bank charter rather than submit to the supervision of the OCC [NOTE: this is a reference to the recent filing and subsequent approval of the conversion of Countrywide Financial to a federal savings bank charter from a national bank in it’s successful effort to side-step the basic regulatory provisions related to non-traditional mortgage risk management proposed last September by both the OCC and the Federal Reserve]” said Emory Rushton Senior Deputy Comptroller and Chief National Bank examiner, Office of the Comptroller of the Currency.

The second panel was allocated to representatives from several lenders including Countrywide Financial, HSBC Finance Corporation, and WMC Mortgage a subsidiary of GE as well as several consumer advocates and consumers themselves.

The following are some notable quotes from the second panel’s opening statements:

“[on changes at WMC Mortgage] First, borrowers will be qualified on the fully indexed rate, second on new loans, prepayment penalties will expire 60 days prior to the first interest rate reset date, … third, WMC will not make loans based on stated income except in the case of borrowers who are self employed and then, only with the appropriate verification. Beyond what has been proposed in the guidance, WMC will continue its historic policy to not offer any option ARMs or products with negative amortization and going forward, we will begin to hold a portion of this loan portfolio on our own books.” said Laurent Bossard Bossard, Chief Executive Officer, WMC Mortgage.

“Countrywide is primarily a prime lender, as I’ve mentioned, 93% of our originations are to prime borrowers [NOTE: this is only true for the month of February 2007. Countrywide’s full year 2006 was closer to 10% subprime originations] … Cumulatively over the past 10 years, Countrywide originated almost 540,000 hybrid ARM loans and less than 20,000 less than 3.5% of those hybrid loans have gone through foreclosure.” said Sandy Samuels Samuels, Executive Managing Director, Countrywide Financial Corporation.

During the Q&A portion of the second panel the most notable exchange came from Senator Dodd and Sandy Samuels of Countrywide:

When asked by Senator Dodd about what the point of a “teaser rate” was, Samuels suggests.

Samuels: “It makes the loan affordable… ”

Dodd: “Yea but if it’s only for a year or so her [a consumer] circumstance is not going to change… if she’s 70 [years old] with a teaser rate, and [then] she’s 72 what’s her circumstances?”

Samuels: “If she makes the payment on time, for the period of those two years, her FICO score will go up and we will be able refinance her into a prime loan…. She’ll pay less because she would have gone from a subprime loan into a prime loan.”

For my money, the best testimony came from Consumer Attorney Irv Ackelsberg (which kicks in at 3 hours 24 minutes) Ackelsberg who states:

“What we are seeing, I believe, is a run away train that is only starting to gather speed. These recent foreclosures reflect large numbers of early payment defaults, that is, homeowners defaulting before the fixed rate periods on their loans expire and the adjustments kick in. We have yet to see the full effect of those adjustments. It is not unreasonable to predict as many as 5 million foreclosures over the course of the next several years, a number that represents one out of fifteen homeowners in this country.”

“But think it would be a really bad mistake for this committee to think that the problem can be solved by reining in the brokers, we have to understand that they are selling the products that the lenders want them to sell and the lenders themselves are selling the products that Wall Street has ordered. The ultimate consumer here is not the homeowner. There’s no real market demand for being ripped off. The real market is on Wall Street, for bond securities. And the broker and the lender and everybody else in between is part of a factory that’s producing bond securities for Wall Street. That’s the real market, and that’s the real culprit.”

The entire hearing can be viewed here in Real Audio format.

Unfortunately, I wasn’t able to capture the feed as a Windows Media file so I can’t add it to BNN. If anyone knows of a reliable RM to WMV conversion utility, I would greatly appreciate the information.

Posted by SoldAtTheTop at 7:50 AM