Whaler or a Yatch? 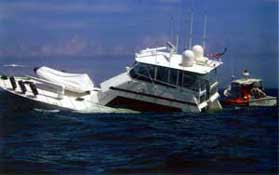 This reflected a significant series of pretax impairment charges related to their Fort Myers-Cape Coral Florida operations which totaled $93 million.

Apparently, Hovnanian acquired land and started building in the Fort Myers area in August 05, the exact month that MLS listings in that area soared from less than 5000 to over 20,000.

The first quarter also showed a 36% cancellation rate, the highest Hovnanian has recorded since the downturn began.

But with all this, Hovnanian, although sounding very tentative and even explicitly reiterating that he is tentative, suggests that many markets may be starting to stabilize.

“Its not getting worse and it is slow and steady.”

“To use a weather analogy, it’s not longer a monsoon but it’s been downgraded to scattered thunder showers”

Making another analogy, Hovnanian suggests that the market is possibly near a bottom with a “boat hull” shaped recovery.

“Consequently, we are optimistic that the market may be near a bottom or could achieve a bottom some time soon, perhaps near the sales pace and prices that we are experiencing. When we do find the bottom, of this market downturn we are not anticipating a V-shaped or even a U-shaped recovery rather we believe the recovery is more likely to first exhibit a prolonged period of stabilization and fairly flat performance before turning up. I visualize this projected pattern of improvement as being similar to the shape of a boat hull, moving from the stern to bow, with the stern representing a recent sudden fall-off in the market and the bow representing the ultimate recovery with a more gradual smoother shape after a flat period in between.”

“What we don’t know is whether the boat is an 18 foot Whaler or a longer sea-going yatch.”

As for the percentage of buyers using sub-prime loans in order to finance Hovnanian homes, Hovnanian reported that based on roughly 70% of transactions, 18% of fiscal 2006 and 14% of Q1 2007 were financed with sub-prime loans that were either brokered or originated by Hovnanian’s own inside mortgage company.

When asked about the 30% of transactions that wasn’t captured, Hovnanian’s CFO J. Larry Sorsby answered:

“If you had asked me two weeks ago, frankly we hadn’t really focused on this a great deal, we would have been working under the premise that we were 5%, 6% or 7% use of sub-prime but once actually did the analysis and got the data put together, were telling you what our mortgage company originated.”

Sorsby goes on to suggest that California has always had the most use of creative loans and that the likely outcome of tightening standards will shrink the market of buyers but that it was hard to quantify.

Additionally, it appears that Hovnanian has taken some fairly significant steps to contain costs reducing the company’s head count of the company by 20%.

“We have already reduced head counts for the last three quarters by 20%... What we are going to do going forward is as particular markets experience slower sales we will obviously right side the organizations market by market and if they have great sales we wont have to make adjustments.. It’s a market by market situation.”

The complete audio of the conference call can be listened to here.

Posted by SoldAtTheTop at 3:10 PM