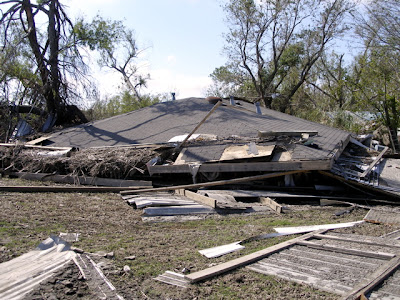 Today, the Massachusetts Association of Realtors (MAR) released their Existing Home Sales Report for May 2007 showing further weakness to the regions residential housing market with sales of single family homes declining 7.5% compared to May of 2006.

Along with the release, MAR President Doug Azarian continued to maintain an optimistic outlook even in the face of renewed sales declines and the obvious implications of tighter lending standards.

“While tighter lending standards and reduced mortgage options for some prospective buyers this year may have had an impact on the market, stable prices and declining supply indicate there is still a steady demand. In fact, May is the fifth straight month that residential supply levels have gone down. We can speculate that demand will continue to go up during the second half of the year.”

Note that a key tenet of Azarian’s optimistic outlook depends on the “stable” prices seen when calculating the median prices based on the MAR MLS data.

Using the broader data reported during deed and mortgage transactions filed in the state's registries of deed, The Warren Group showed a 4.6% year-over-year decline to the median price of a single family home.

It’s important to note, also, that the Warren Groups numbers are more consistent with the trend and latest year-over-year results seen in the S&P/Case-Shiller index for Boston which today showed a 4.52% decline to single family home prices with futures indicating further declines for the remainder of the year and on into 2008.

Additionally, although the “MLS listed” inventory has declined throughout the last year, the sales pace has dramatically slowed resulting in an average of a 139 “days on market” for a single family home, an increase of nearly 15% compared to May 2006.

With significantly falling prices, continued declining sales volume and a slowing pace of sales, it seems hard to believe that Azarian’s optimistic outlook has any merit especially when considering that all of this weakness is coming on the back of the historic declines seen in 2006.

A more likely scenario is that our area is experiencing a fundamental correction to prices that, through unusually low interest rates and historically easy lending standards, were able to rocket to irrational heights during the run-up years.

To better illustrate the drop-off in home prices and the potential length and depth of the current housing decline, I have compared BOTH the year-over-year and peak percentage changes to the S&P/Case-Shiller home price index for Boston (BOXR) from the 80s-90s housing bust to today’s bust (ultra-hat tip to the great Massachusetts Housing Blog blogger for the concept). 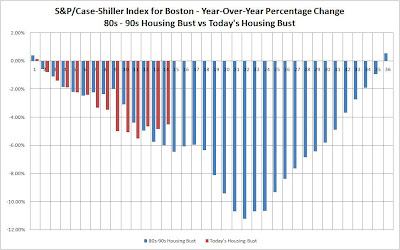 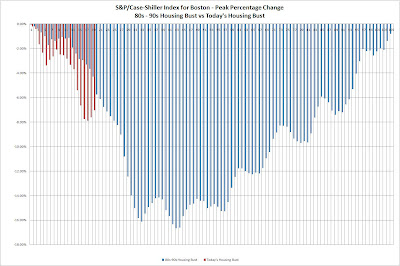 In this way, this chart captures only the months that showed monthly “annual declines” and as we can see, if history is to be a guide, we could be about one third of the way through the annual price declines with the majority of falling prices yet to come.

The “peak” chart compares the percentage change from the peak, comparing monthly BOXR values to the peak value seen just prior to the first declining month all the way through the downturn and the full recovery of home prices.

Notice that peak declines have been more significant to date and, keeping in mind that our current run-up was many times more magnificent than the 80s-90s run-up, it is not inconceivable that current decline will run deeper and last longer.

Posted by SoldAtTheTop at 12:09 PM