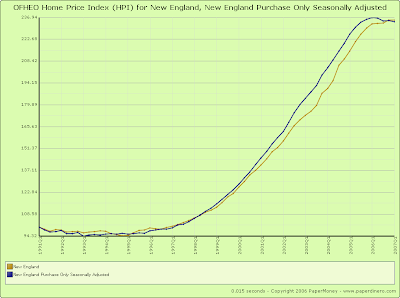 Last Friday, the Office of Federal Housing Enterprise Oversight (OFHEO) published their Home Price Index (HPI) data for Q1 2007 showing continued deceleration of home price appreciation in most regions as well as outright declines in many states and metropolitan areas.

The current installment shows declines to the East North Central and New England census regions as well as to 25 states (using “purchase only” data) including Michigan, Massachusetts, Californian, and Florida and a whole host of Metropolitan Statistical Areas (MSA).

I have updated my OFHEO HPI Charting Tool by both updating the data as well as adding some additional features that make the tool more powerful but first, I should mention some background on the OFHEO HPI.

The OFHEO HPI series is formulated from home purchase and refinance information collected from Fannie Mae and Freddie Mac and as such suffers slightly from some basic limitations of the data.

First, Fannie and Freddie mortgages are subject to conforming loan limits which eliminates huge portions of data that are particularly relevant given the current bloated state of home prices.

A great percentage of home purchases made in the last decade, especially in the bubbliest areas, were made with Jumbo loans that, by their definition, exceed the Fannie-Freddie conforming loan limits and as such are not included in the OFHEO data.

Also, data from mortgages made for the purpose of refinance are also included which may have a tendency to skew the HPI series.

In general, because the “Purchase Only” indices are based on home price changes from only home purchase transactions, they tend to show a greater degree of deceleration and/or decline than the complete data indices and may be a better indicator of the overall state of each particular housing market.

Although it’s generally recognized that the S&P/Case-Shiller (CSI) home price indices are more accurate than the OFHEO indices, OFHEO offers data for over 400 different census, state and metropolitan statistical areas compared to only 20 major metro areas for the CSI.

The OFHEO HPI Charting Tool allows you to visualize the HPI data as well as compare data from different areas.

Additionally, the tool now fully supports the “Purchase Only” data as well as allowing you to “normalize” the data in order to make a true comparison from one area to another.

To illustrate how to use the tool, I will build up a simple chart that compares the data from the New England census division, Massachusetts, and the Boston-Quincy and Cambridge-Newton-Framingham Metropolitan Statistical Areas (MSA).

For the following chart (click to jump to the tool itself), I added the New England census division to the chart by going to the “U.S. Census Regional Division” section and “checking” New England and also “un-checking” the United States.

Then, in the section of checkboxes just under the “Update Chart” button, I checked the “Show Complete Index”, “Show Purchase-Only, Seasonally Adjusted Index (if available)” and “Normalize using base of 100” checkboxes.

Finally, I constringed the date range a bit by going to the “Date Range” section at the bottom and selecting “1991” in the first dropdown and then clicked the “Update Chart” button.

Other than the over 150% increase in New England home values seen since 1993, this chart shows that the “purchase only” index has seen a more significant increase that the “complete” index and appears to have declined more since the peak.

To get a better sense of what has gone on since the peak, let’s constrain the date range even more, by setting the starting year to “2000” in the first drop down found in the “Date Range” section at the bottom and then clicking the “Update Chart” button.

Since the “complete” data seems less then perfect, lets “un-check” the “Show Complete Index” checkbox found at the top and “check” the Massachusetts checkbox found in the “States and District of Columbia” section and then click the “Update Chart” button.

We can see from this chart that Massachusetts actually peaked in Q2 2005 and has been trending down ever since as well as the fact that the extent of the decline seen in Massachusetts far surpasses that seen by the New England region as a whole.

But something about this chart seem to run counter to the basic expectation that Massachusetts has the “hottest” real estate markets in New England, namely the fact that the New England data seems to peak at a higher value than the Massachusetts data.

This is because the chart is showing the two data series in “normalized” mode which, for simple comparison purposes, adjusts all the data on the chart to start with a base value of 100.

With the normalization feature you can compare two totally different data series and get a sense as to the relative changes they have made over the same time period.

In order to get the “real” view of the data, simply un-check the “Normalize using base of 100” checkbox and click the “Update Chart” button.

Now you can see that Massachusetts home prices have appreciated to a greater degree than the New England region as a whole.

But since we really do want to make a relative comparison across different data series, let’s continue with the “normalize” checkbox checked.

Now you can see that Boston peaked in Q1 2006, and Cambridge peaked in Q3 of 2005 while all data series declined steadily throughout 2006 and continue to decline today.

You can follow these general steps with any state and set of areas and do particularly interesting comparisons by “mixing and matching” completely unrelated areas.
Posted by SoldAtTheTop at 1:00 AM