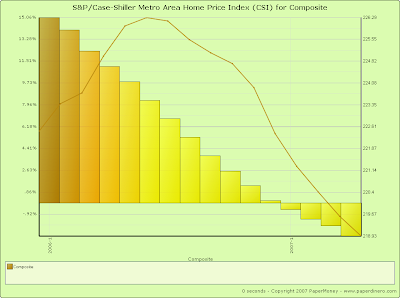 Today’s release of the S&P/Case-Shiller home price indices for April continued to show weakness for the nation’s housing markets with 14 of the 20 metro areas tracked reporting significant declines.

To better visualize the results use the PaperMoney S&P/Case-Shiller/Futures Charting Tool and be sure to read the Tutorial in order to best understand how best to utilize the tool.

Additionally, in order to add some historical context to the perspective, I updated my “then and now” CSI charts that compare our current circumstances to the data seen during 90s housing decline using BOTH annual and "peak" percentages changes. 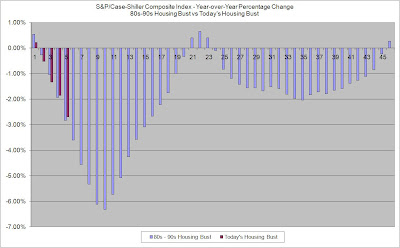 What’s most interesting about this particular comparison is that it highlights how young the current housing decline is, having only posted four consecutive year-over-year (YOY) monthly declines to home prices.

Looking at the actual index values normalized and compared from the respective peaks, you can see that we are only ten months into a decline that, last cycle, lasted for roughly fifty four months during the last cycle (click the following chart for larger version). 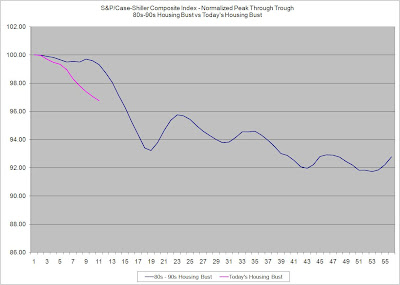 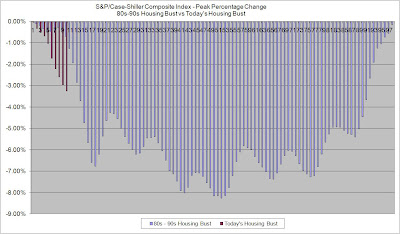 Notice that peak declines have been FAR more significant to date and, keeping in mind that our current run-up was many times more magnificent than the 80s-90s run-up, it is not inconceivable that current decline will run deeper and last longer.
Posted by SoldAtTheTop at 9:56 AM