How The Bear Popped The Bubble! 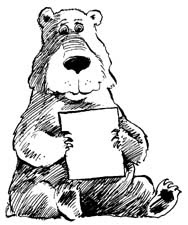 Gather 'round all ye bubble-sitting families and partake in a reading of this warm old holiday classic by Dr. SoldAtTheTop! (Originally posted Christmas 2006!)

Every Bull
Down in Bull-ville
Liked the Housing Bubble a lot...

But the Bear,
Who lived just South of Bull-ville
Did NOT!

The Bear hated the Bubble!
He blamed the Fed, rates and lending!
But the Bulls didn't care, they just kept right on spending.
It could be that Bulls were just very trendy.
It could be, perhaps, they were whipped into a speculative frenzy.
But I think the most likely reason of all
May have been that their noggins were two sizes too small.

But,
Whatever the reason,
Their heads or the craze,
They continued to spend, for days upon days.
And the Bear, staring up from his cave down below
Sensed the limit had been reached, things were going to BLOW!
For he knew every Bull up in Bull-ville that night
Had stretched every dollar, squeezed their finances tight.

"And they're going back for more!" he could see to his dismay
"This just cannot last, not for one more day!"
Then he ran to his closet to fetch a loud-speaker
"I MUST warn them all, before they get in any deeper!"
For, the Bear knew...

...All the Bull girls and boys
Who had been flipping, and borrowing and buying up toys
Were all skirting the edge, sitting perfectly poised
For collapse that once realized... oh, the noise! Noise! Noise! Noise!

Then the Bulls, young and old, will be in a terrible fix.
And they'd have to hunker down and stop all their mad tricks!
And the economy... oh what a mighty deep-six!
It will sink faster than boat load of bricks!

And THEN
Something would happen that he liked least of all!
Every Bull up in Bull-ville, the tall and the small,
Would all start to panic, when home prices stop swelling.
They'd reverse the craze… they'll all begin selling!

Then the Bear said, "I’m off!"
And he drove forty blocks
Toward the homes that the Bulls
Had been trading like stocks.

All their windows were bright. Flat panel glow filled the air.
All the Bulls were all carrying-on without even a care
When he came to a stop in the Bull-ville town square.
"This is the best place," the Bear thought as he reached
For the microphone that he would use when he preached.

THEN
Click! On went the siren, the lights and the speaker!
Then the Bear started yelling! "Things are looking bleaker and bleaker!
You all must come out, listen to what I have to say
Give me a chance to appeal to your senses today!"

Then one Bull emerged through his front door.
Then another came out, and some more... then still more.
Soon the square was abuzz with a large crowd of Bulls
All grumbling and muttering about association rules.

But the Bear went on "You are all in grave trouble!
I have come here to warn you of the Great Housing Bubble!
You see it's been inflating, stretching thinner and thinner..
If you don't stop now, there will be almost no winners!"

"This is the greatest Ponzi-scheme ever devised
Where all of you have been convinced to not question your eyes.
Just go right on speculating... pushing prices up higher
And assume there will always be a greater fool buyer!"

"But Things are now not looking so hot...
Home sales are plunging, The builders are shot!
Inventory is rising, there is no place to hide.
Soon you will be in for a vicious price slide!"

Then he clicked off the speaker and he heard not a sound.
The Bulls all looked puzzled, just standing around.
Then one Bull, an Economist named David Lereah (Pronounced Le-ray)
Stood up and he shouted, "I have something to say!"

"You are a very foolish Bear!" He said with a sigh
"This is a GREAT time to SELL or to BUY!
Yes prices are moderating, that much is sure true.
But that is a HEALTHY sign that the market will pull right on through.
I've seen all the numbers, I release them you know...
And what I've seen is STABILIZATION as we level off at the low"

"So pack up your things and head off down the hill!
We don't need your type of hype in Bull-ville!"

So the Bear did as he was told, all downhearted and grim.
He silently opened his car door and stepped in.
And he backed down the hill and then crawled into his cave.
And he thought about the Bull-ville that he failed to save.

But just then the Bear heard a horrible sound!
A massive explosion that sent shock waves through the ground!
As he looked from his window, he could not believe either eye...
The whole of Bull-ville had been blown to the sky!

And what happened then...?
Well, in Bear-ville they say
That although he was sad...
His pride grew three sizes that day!
And the minute his heart stopped feeling so blue
He published a book titled "What To Do and Not To Do If a Bubble Finds You!"
Posted by SoldAtTheTop at 9:50 AM