Today’s release of the S&P/Case-Shiller (CSI) home price indices for October 2009 showed that the non-seasonally adjusted Composite-10 price index remained flat since September while the Composite-20 declined for the first time in six months indicating that the government sponsored housing bounce has clearly drawn to a close.

It’s important to remember that the CSI data is lagged by two months and that today’s results represent an average of prices paid from home sales closed between August-October.

Now that the strongest selling months have largely been reported, look for all remaining CSI release continue to indicate notable price weakness coming from typical seasonal declines as well as extra-seasonal declines as a result of notably reduced demand from activity that was “stimulated” forward into the summer by the tax sham.

Also, looking at the 1990s-era comparison charts below its obvious that even after the main downward thrust has been reached, the housing markets have a long tough slog ahead with the ultimate bottom likely many years out…. Or if we are currently experiencing the Japanese model… decades out.

Further, is important to remember that the 90s housing recovery played out against the backdrop of a truly unique period of growth in the wider economy fueled primarily by novel and ubiquitous technological change (cell phones, internet, personal computers, telecommunications, etc).

To better visualize today’s results use Blytic.com and search for “case shiller”. 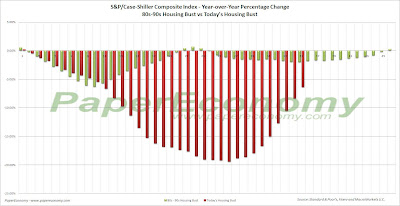 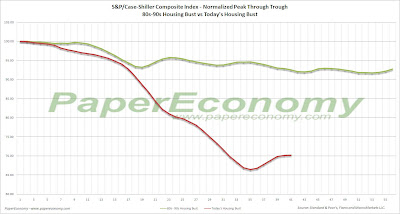 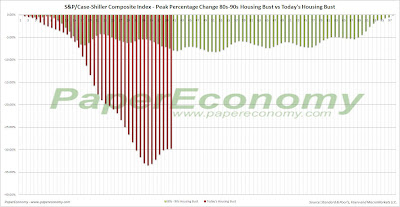 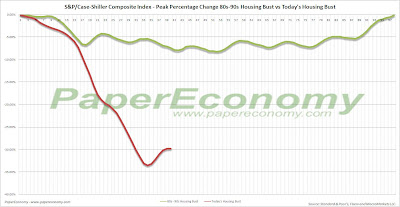 As you can see the last downturn lasted 97 months (over 8 years) peak to peak including roughly 43 months of annual price declines during the heart of the downturn.
Posted by SoldAtTheTop at 1:22 PM