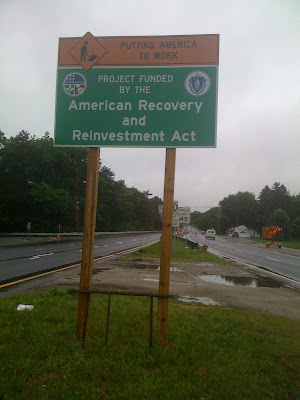 How novel! … This way Americans can take the ups with the ups and the downs!

No sense is feeling the pinch of that downturn (even if the pinch is coming on the heels of a multi-decade speculative frenzy and consumption boom)… with the federal government around prosperity is not just a goal … its mandatory!

With $8000 homebuyer tax credits, unemployment benefit extensions, foreclosure mitigation efforts, government controlled mortgage lending rates, corporate bailouts and emergency facilities for just about every non-functioning credit market the Federal Reserve can prop-up it seems that everyone from Wall Street titans to the (…formerly) affluent and capable “upwardly mobile” Americans to the common man are sidling up for a suck from the teat.

But, before you get all up in arms over the “transfer” portion of “transfer payments” one should first consider the extent of the money creation that has taken place in the last six months…

In this way the U.S. government (in an uncharacteristic stroke of efficiency) has cut out the middle man… no sense in promoting some fraudulent industry (like finance, mortgage, and real estate) just to tax and spread… simply print up all the dough and dole it out like monopoly money.

Is inflation on the horizon?

The government clearly has that as its foremost goal and the seeds are clearly in place but in any event, we are all a lot worse off for the multi-decade speculative manias and the government’s equally distorted and delusional response.

By the way… for those of you wondering… the image above of the sign proudly announcing a project funded by the “American Recovery and Reinvestment Act” was taken within the borders of Lincoln Massachusetts… one of America's most affluent communities...
Posted by SoldAtTheTop at 9:17 AM