Not Participating In The Boom or The Bust! 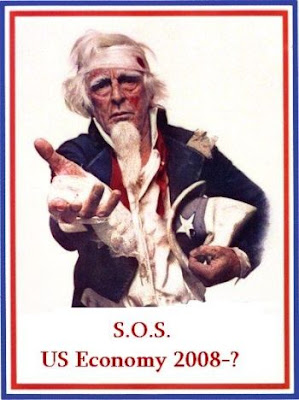 Probably the most significant issues currently plaguing the U.S. economy are posed not by the housing market but by the job market.

In order to recognize the severity of the situation one needs to consider that since 2000, nearly a decade, our labor market has been showing significant and unusual signs of weakness.

This is not a new revelation.

The concept of a “jobless recovery” was spun precisely for the purpose of “explaining” how we could “recover” from our last decline (dot-com bust) but not in typical fashion…. a “recovery” without the jobs.

As I have stated before, I don’t happen to believe that there is such thing as a “jobless recovery”… your economy either grows in a real and meaningful way (at least trend job creation) or it doesn’t.

In the past (see the Envisioning Employment posts) I have plotted the ratio of total and private non-farm payrolls to the civilian non-institutional population (in effect factoring out growth in population) and its quite clear that the run seen since 2000 stands out as the single weakest 10 year period in the post WWII period.

Another way to look at this weakness is the “civilian participation rate” which is essentially the same as my “non-farm payroll population ratio series” except its baked off of the household survey side of the employment situation report (i.e. NOT from the establishment).

Study the interactive chart below (click and install Microsoft Silverlight (like the Flash player) if you haven’t already).

Although the period between late 1956 and late 1962 (scroll over to the left…) looks to have brought a fairly significant 1.8% decline in workforce participation (against the backdrop of a growing population of workforce participants) our current decline appears not only to be about to best that percentage, but possibly more importantly, has been experiencing this declining trend far longer.
Posted by SoldAtTheTop at 3:52 AM