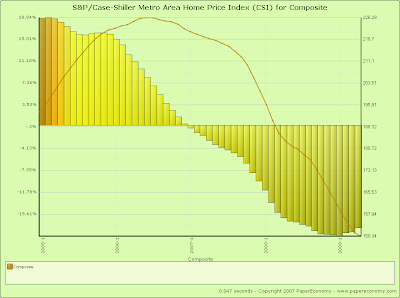 Today’s release of the S&P/Case-Shiller home price indices for April 2009 show continued deterioration in many regional markets while some of the most seasonal markets experienced the typical spring bounce resulting in a moderate decline to the composite indices.

It’s important to recognize that the inherent seasonality of many of the component markets brings upward momentum to prices during the spring selling season be it an up-market or down.

Even a cursory glance at the charts below should result in the firm understanding that what we are experiencing today is unprecedented.

Thirty four months into the decline and the bottom to the home price slide is nowhere in sight.

The most optimistic argument one could make at the moment is that the pace of the decline is currently slower than it was a few months ago.

That should come as little comfort though considering that this decline will more than likely continue for another two to three years.

It’s important to consider that the 90s housing bust took roughly 50 months to reach the bottom in prices but as you can see from the charts below, our current housing bust literally dwarfs the 90s era tumult.

Further, the 90s housing recovery played out against the backdrop of a truly unique period of growth in the wider economy fueled primarily by novel and ubiquitous technological change (cell phones, internet, personal computers, telecommunications, etc).

In all likelihood, our current decline will play out at least as long as the 90s era (more than likely far longer) with a full recovery measured not in years but in decades. 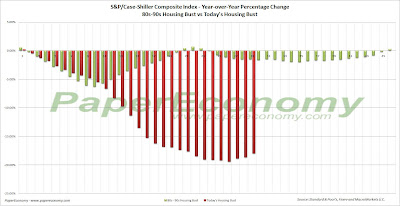 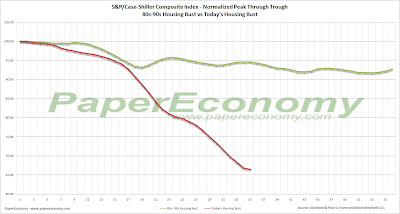 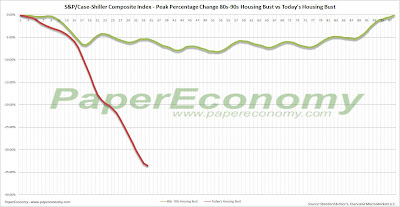 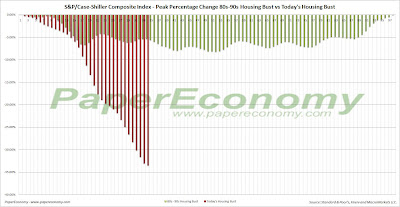 As you can see the last downturn lasted 97 months (over 8 years) peak to peak including roughly 43 months of annual price declines during the heart of the downturn.
Posted by SoldAtTheTop at 9:37 AM